New Energy Times had received a tip from a LENR researcher that the gain was 18 milliwatts.

Today, another LENR researcher provided us with Swartz's data. The first researcher was off, but not by much. It was 80 milliwatts, not 18.

When Swartz published his claim on his Web site, he failed to tell readers - many of whom are new to LENR - that his claim was in milliwatts. This was a crucial omission because, for the past year, most of the news in LENR has been dominated by the extraordinary claims of "Energy Catalyzer" inventor Andrea Rossi, who has made claims in megawatts.

Less significant, but still important, was that Swartz failed to tell readers that the excess-heat period ran for only three minutes.

Swartz's results are no different from thousands of other LENR experiments in the last 23 years. A LENR researcher who requested anonymity was surprised that Swartz would report this as a significant result.

"There are three graphs," the researcher wrote. "The third one is the only understandable one. Swartz's demonstration was showing an efficiency of 10, which sounds good, but his peak power output is only 80 milliwatts! That's right: MILLIWATTS!

"In 23 years, he has yet to sustain anything more than 1 watt. There is little in Swartz's work to get excited about."

The second researcher, who provided Swartz's slides today, wrote this comment to me in an e-mail:

"When you look at the data, you can see, barely, a 1 degree C temperature rise for about three minutes, using about 12 mW of input power to produce less than 100 milliwatts of heat. This is not a breakthrough." 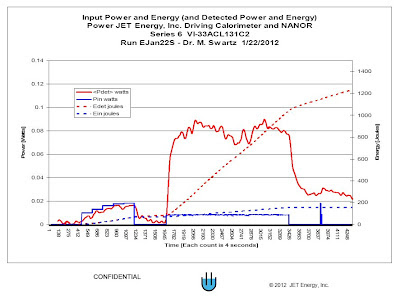